You are at:Home»Community»Surviving Denmark and Sweden on Bitcoin

Surviving Denmark and Sweden on Bitcoin

So I planned to spend 15 days in Denmark and visit Sweden as well, and while there, why not try surviving on Bitcoin only. Flights can be booked through CheapAir, BTC Trip and relatively recently Expedia and so on…so that is not a problem. I booked my hostel through Destinia and paid in BTC. 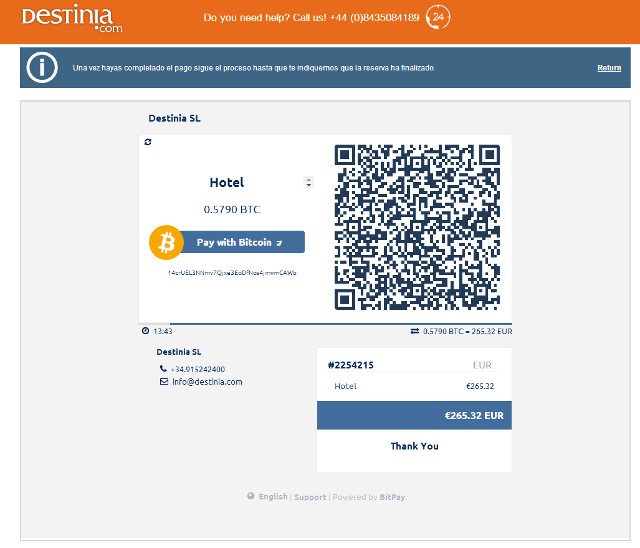 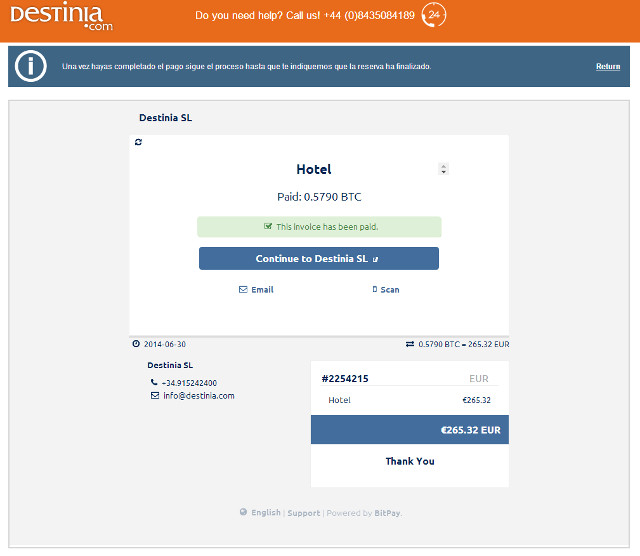 Now I was ready for the flight to Copenhagen. Well, easier said than done. There are a few places that accept BTC, but not many, nothing like the US or Berlin in Germany. So using Bitcoin directly would theoretically be possible but it’d mean I’d be restricted to eating in one restaurant and drinks in two bars in Copenhagen 😀 That would be a bit too extreme, so I figured if I exchange some BTC once I arrive to the Danish Krona (DKK), that should count as BTC use as well since I wouldn’t be using any of the backup fiat I brought with me, nor would I be relying on cards or any other financial gimmicks. So I’d be allowed to spend BTC directly or exchange it to DKK with someone from Localbitcoins. I’d be paying directly in BTC for the majority of expenses though.

Well, that was a reasonable plan, but the first problem already appeared at the Copenhagen airport. Since no transport can be paid for in BTC, and no one from Localbitcoins wanted to come to the airport to exchnage BTC to DKK, I had no option but to walk to the city centre… 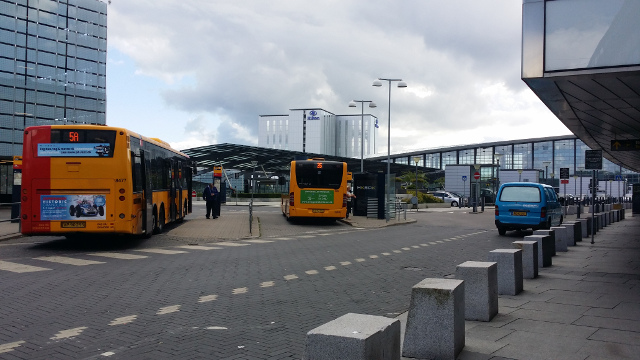 Public transport in front of the airport, no BTC accepted 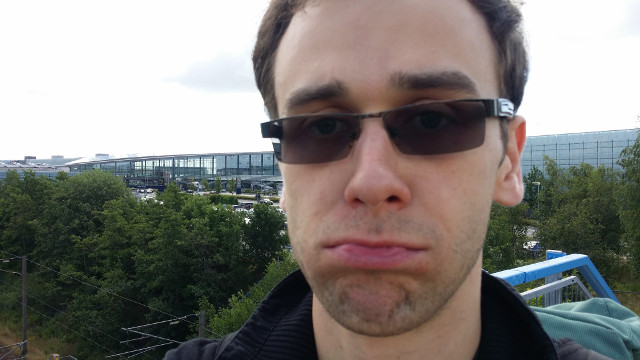 The start of a long walk… 🙁 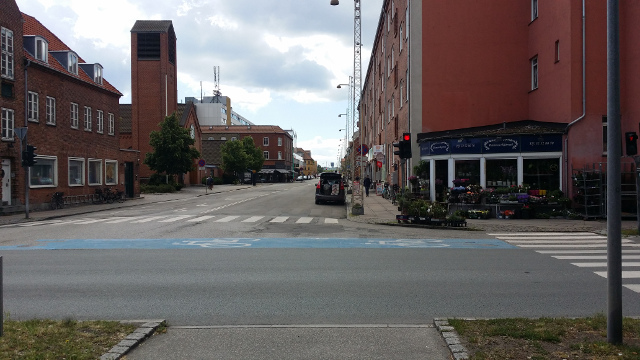 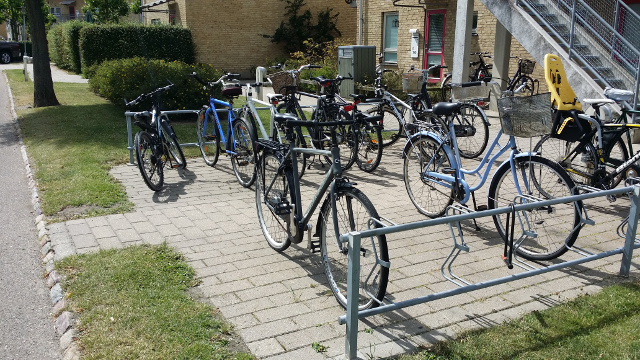 Another option was to steal a bike, some are unlocked, and after walking for a while with a heavy backpack, it certainly started to become a tempting idea…to make use of that Danish hospitality 😀 Still, it wouldn’t be a good promotion for Bitcoin and I don’t think the police there would have appreciated my reasoning. Anyway, I knew before coming it’d be a bit of a walk and it wasn’t too bad. Still, you the reader, will have to endure a series of boring suburban photos to get some sense of the distance and experience at least a fraction of my suffering. 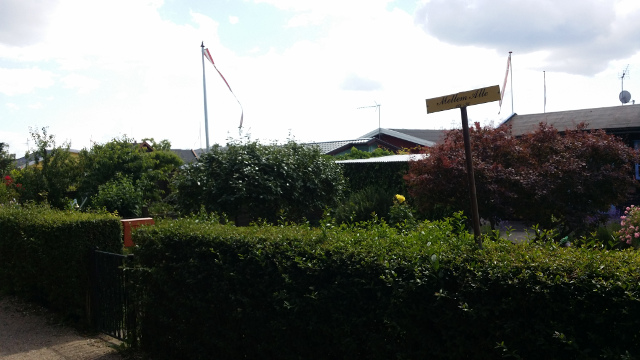 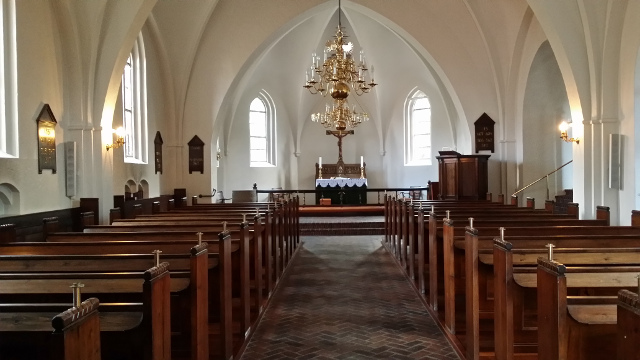 I stopped to pray…to get delivered to the city centre 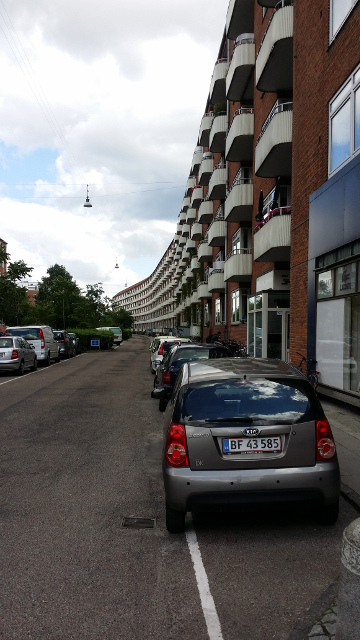 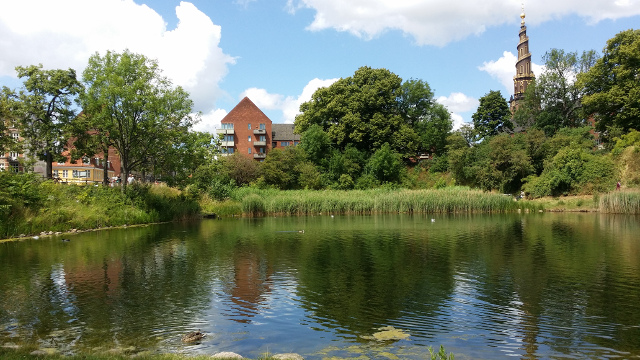 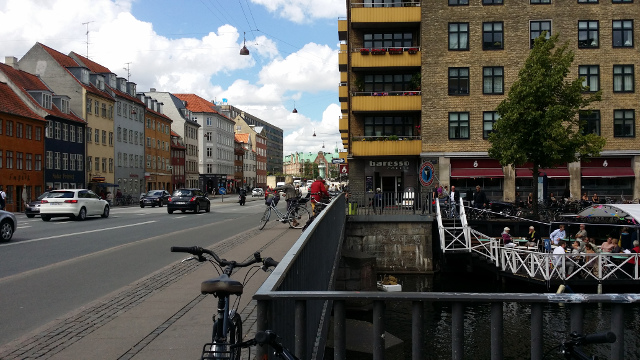 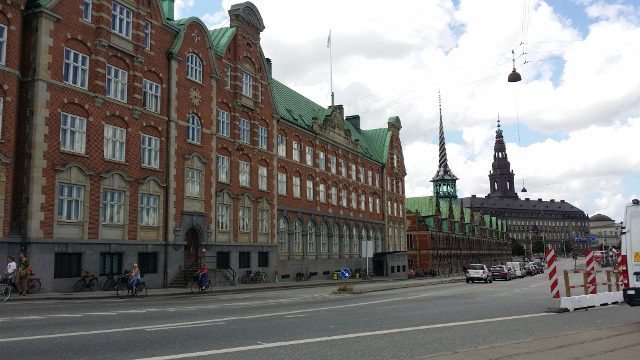 Ex-stock exchange…no wonder it looks evil. That spire is like something out of Giger’s Dark Seed

It took me about 2-3h to reach the centre, with some stops on the way. There, I immediately met with Thorkil Værge from Localbitcoins and exchanged 0.5 BTC to DKK. 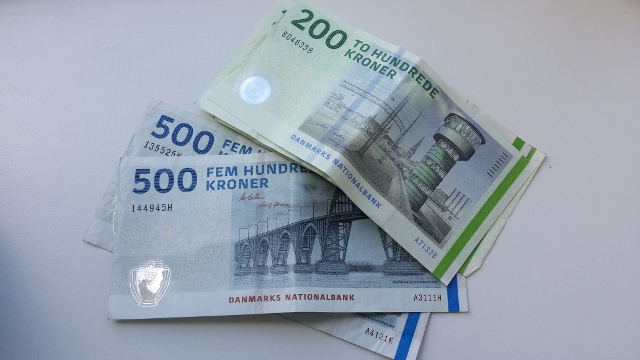 After that I headed to the hostel to check-in. Later that day I had the first Bitcoin meal in Palaeo. It’s sort of food that people presumably ate 30,000 years ago, hunter-gatherer lifestyle; only meat, fruit and veg, almost no carbohydrates. It’s the diet that suites me anyway, and I discovered it only because they accept Bitcoin. I found it a bit overpriced even for Danish standards. A simple meal was around 40$ and then extra for the drinks. 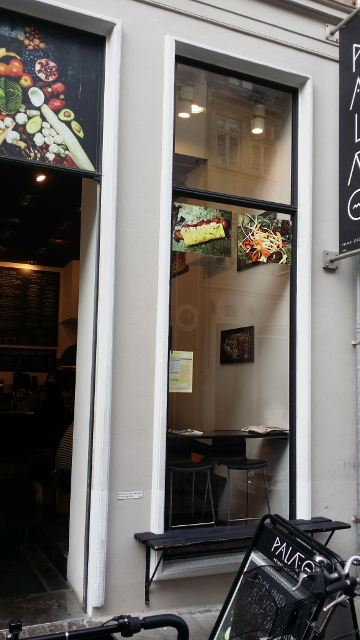 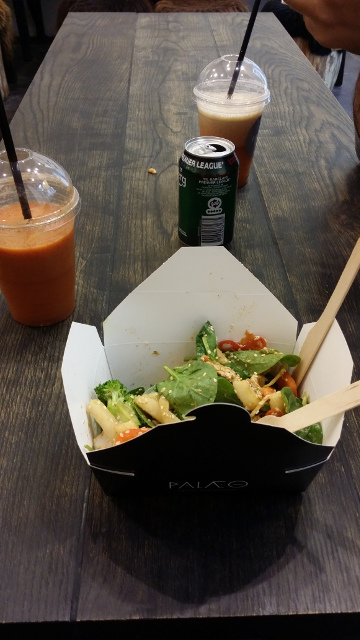 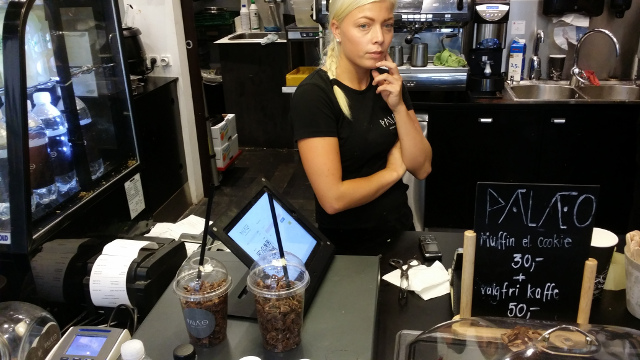 …and the QR bill

The first Copenhagen bar I’ve been to was Toga. It’s close to the parliament, and apparently many politicians visit during the day. Drinks are about 10$, but that’s not unusual for Copenhagen. I went there with Thorkil Værge from Localbitcoins. I wouldn’t have found it otherwise, since it’s not marked on Coinmap yet. He told me two interesting stories. One was about a guy who’s putting his BTC into renovating a castle in Estonia, that would be used for some sort of Bitcoin VIP meet-ups. Something like Bilderberg of Bitcoin world, great for conspiracy theories 🙂 Another was about a guy who mentioned at a conference a few years prior to 2009 that he had solved the Byzantine generals problem. I don’t really care much about who Satoshi is, but still, it’s fun hearing some Bitcoin gossip 😀 The second time I went to Toga, a few days later, there was an older waitress there and she didn’t know how to accept BTC payments. Unsurprisingly, I found this type of problem reoccurring frequently. 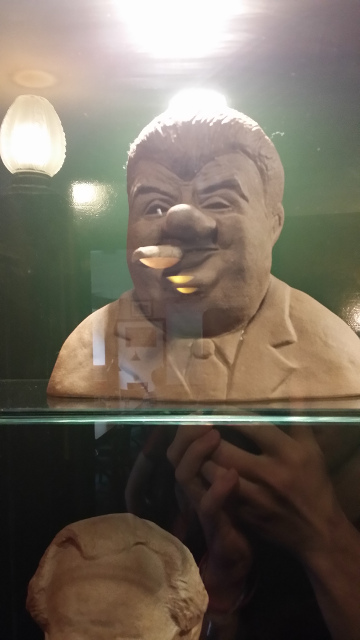 Toga pub. They have casts of famous politicians. This one looked especially trustworthy

Then I went with Thorkil Værge to check out the only Bitcoin ATM in Copenhagen, one way Lamassu (DKK to BTC, so not useful to me), that he operates as well. He opened it and I got to see the innards. The pub itself doesn’t accept BTC yet, but he said it should soon. 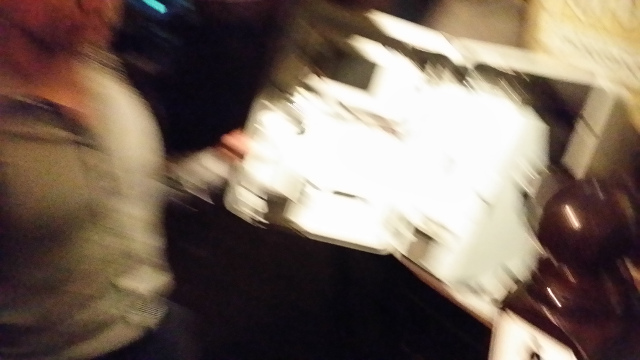 Lamassu ATM at The Dubliner. You’ll have to take my word, it is Lamassu…not one of my best pics 😀

I proceeded to check out other bars marked on Coinmap. Jane’s was closed, unfortunately, it looked interesting…like some sort of strip bar / classy undercover brothel / swingers club. I guess I’ll never find out. The next on the list was Mouse and Elephant, which had such a small, dug in entrance that I walked past it the first time and had to retrace. It was a nice day and I felt it was a shame I had to go into this basement. There were just two middle-aged guys at the bar, no one else there. One of them told me a story about his holiday in Bulgaria and some French guy who was hitting his own son repeatedly in the face with a rubber ball. I ordered one drink, and successfully paid in BTC. After that I ordered a few more whiskies, some home-made beer and I tried two bitter herbal liquors. I happily offered to pay in BTC and then their payment processor system froze. Great. I had to use pretty much all of my backup DKK. That lead to a “funny” situation on Sunday afternoon. I hadn’t eaten anything since breakfast, had very little DKK so I headed to Palaeo, where I would usually eat. But, on Sunday afternoons they’re closed. Thorkil Værge from Localbitcoins was out of town for the weekend so I couldn’t exchange any BTC to DKK either. I decided not to ruin the plan and stay strong, so I didn’t use cards / EUR that I brought with me. I simply didn’t eat that day, but on Monday I had the most delicious breakfast 😉 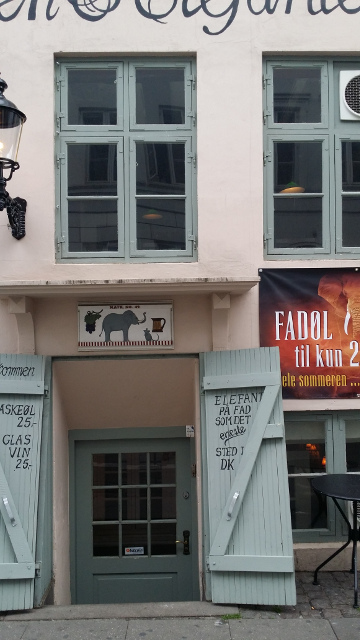 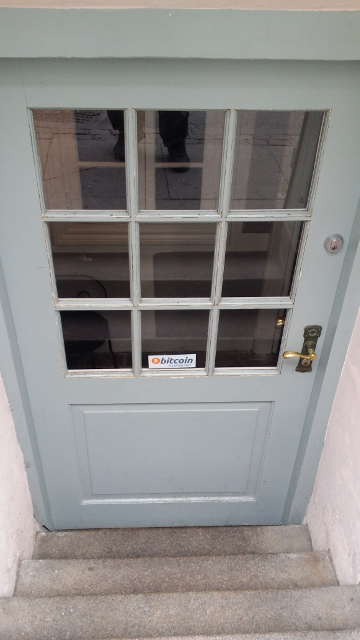 One of the most interesting places in Copenhagen is Cristiania, a hippy / counterculture community that dates back from the 70s. They consider themselves a separate state, with “Welcome to Christinia” signs marking the entrance and “You’re entering the EU” the exit ^o^ The place is pretty big, encompassing an abandoned military base, and many houses on the other side of the river. Their major invention was the Christiania bicycle, a bicycle with a big bucket at the front, where you can transport small kids, without the need for a car. Apparently the royal family owns one as well, isn’t Danish the most egalitarian society out there. Apart from music and art, an important part of their economy is centered around weed and other “light drugs”. The main street is called The Green Run and is full of weed stands and surrounding bazaar with related paraphernalia. While currently tolerated, weed distribution is not legal in Denmark, and the people working at the stands are behind army camo-nets, often wearing balaclavas and sunglasses. So you see an occasional bank robber crossing the street casually 🙂 Partially, it’s a joke as well since the government said they should make themselves invisible, so hence the camo. However, there were some raids in the past, and there are sings everywhere, “no photos”, “no running”. It seemed like a place where there would be some BTC activity as well and sure enough, at an art gallery I noticed a random BTC flyer. It was inside a building so I took a photo. 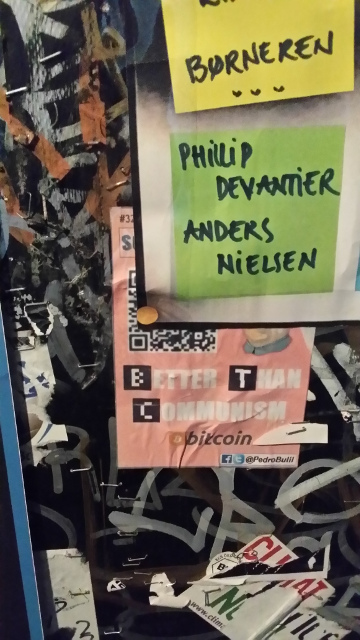 After a week in a hostel (it was good for meeting people, but one week of hard-core snoring was enough though), I moved to a very basic hotel. Very basic in Copenhagen is almost 100$ per night. I’d spend one more week in the hotel. I booked 3 nights through Destinia, since I wasn’t sure if 4 more nights I’d be spending in Sweden. Destinia had some BTC processing problem, and I had to call their customer service. After about an hour wait in the lobby, it was resolved. I was already getting pretty fed up with all the processing inconveniences. While BTC transactions themselves are super fast and reliable, it’s the middlemen / payment processors / staff that are new to it all, and there are more often than not some hiccups. Well, in the end I decided I’d stay 4 more days in the same hotel, and visit Sweden on one day excursion. This time Destinia was telling me there was no free space in the hotel for these dates. On the reception they told me there was free space. But I had to pay upfront. I couldn’t pay with BTC at the reception, of course I didn’t have enough DKK and if I wanted to convert some BTC to DKK who knows when I’d be able to get hold of Thorkil Værge and in the meantime I’d be homeless. I was already pretty tired, and on 10th day I decided to call it quit. I figured I already did fairly well, and 10 days wasn’t bad. 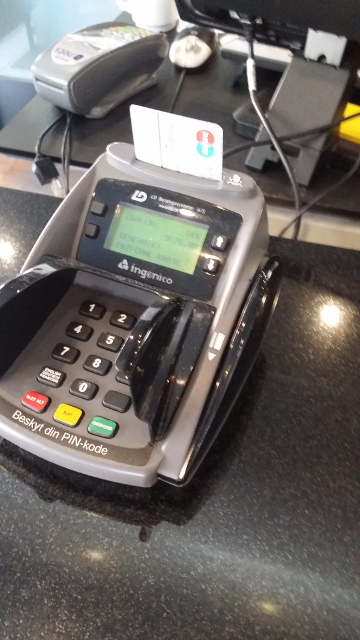 Day 10 Fail. I gave up and used the card, oh the shame

At the end I randomly met an activist crowd protesting against FIFA and the organization of the WC2014. I got them interested in Bitcoin as well. 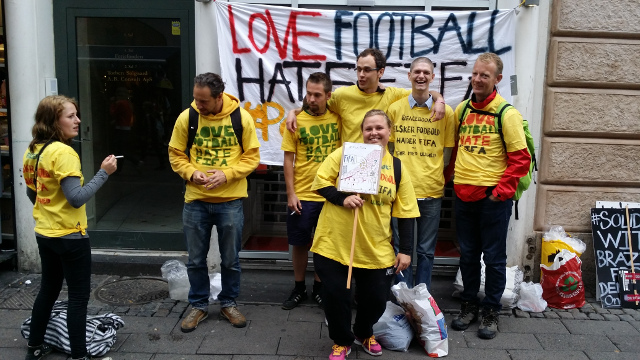 In conclusion, I think that at the current state, using BTC at physical locations is more of a hassle than utility. I expected it to be that way, and it’s something I did for fun and to support the accepting merchants. In the future, I expect it to become convenient as more places start accepting it and middlemen issues get sorted out. It’s really Bitcoin killer apps that will push the acceptance in my opinion. And that is long distance remittance, especially from workers abroad in developed countries sending money to families in developing countries, especially Africa. Getting rid of those huge 20% Western Union fees is a massive benefit. Also, in countries where hyperinflation is a real issue, such as Zimbabwe, Argentina, Ukraine, but EU and US are not out of the question, it can offer stability and almost replace the national currency. Online retailers can reap up massive benefits if they really utilize the advantages of Bitcoin, but seems for now they mostly accept it as a fad. Newegg for example could offer shipping to high risk countries in case of BTC payments (no risk of credit card fraud), but for now they don’t utilize that at all. Also, retailers that actually hold their BTC are at an advantage since they have no conversion fees, but the only major retailer that does so that I know of is Malaysian giant i-Pmart. Then of course there are microtransactions, very large transactions that would be a hassle to push through the banking system easily, political activism, illegal trade and a whole myriad of BTC applications that will always ensure Bitcoin has a strong user base. And that is just considering Bitcoin as a currency / store of value, and not even going into all the other applications of the blockchain.